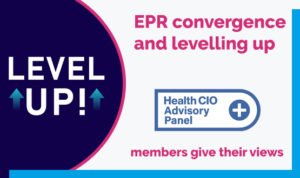 Back in February, the Secretary of State for Health and Social Care, Sajid Javid, said that he wants 90% of NHS trusts to have an EPR in place by December 2023, with the remaining 10% in the process of implementing them.

Then in March, NHS leaders were reportedly told that they must draw up plans to level-up and converge the electronic patient records (EPRs) in use across Integrated Care System (ICS) boundaries.

This target to level up EPR provision across the NHS is in line with the Long Term Plan commitment for providers to achieve a core level of digitisation by March 2025 and demonstrates a clear change in direction on nationally directed digital transformation.

A new policy direction: But is it the right one?

There is no doubt that many people are firmly behind the plans to level up and converge the EPRs in use across ICS boundaries, as the thoughts of some of the CIO Advisory Panel members demonstrate, however these views are far from unanimous.

Someone who is arguably best placed of all the CIO panel members to give their opinion is Kate Walker, digital programme director at Suffolk and North East Essex ICS, who knows exactly how important levelling up and convergence is for ICSs.

“I feel levelling up and convergence is really important to drive out as it will improve care and to allow us to be able to use that core infrastructure to innovate and be adaptive,” she said.

Her thoughts were echoed by those of the director of health informatics at The Rotherham NHS Foundation Trust, James Rawlinson. He believes that “the principle is sound and it’s a reasonable principle to put into the NHS… it makes a lot of sense”.

The broad idea of convergence and levelling up was celebrated by most, with Dan West, chief digital information officer at the Department of Health in Northern Ireland, saying “the notion of convergence is logically sensible” and Darren McKenna, CIO at Cumbria, Northumberland, Tyne and Wear NHS Foundation Trust emphasising that “in principle it’s the right thing to do”.

“My worry about the focus on EPR levels is that it’s to the detriment of everything else, as if that is the only problem that we’ve got in digital healthcare in England,” he told Digital Health News.

“I think too much focus on it as a national thing just doesn’t feel appropriate from where I’m sat in West Yorkshire.”

Jones’ concerns about the plans are shared by the CIO at University Hospital Southampton NHS Foundation Trust, Adrian Byrne. His view is that “the way our service runs in this country, it’s inevitable that you have more than one system, so a utopian view of running everything from one system seems a far stretch”.

As many have alluded to, the idea and principle of levelling up and convergence is a solid one, but there are doubts about where priorities should lie and whether a single system in an organisation like the NHS could function efficiently.

The idea for levelling up across the country and reducing health inequalities is for all trusts and organisations to achieve a minimum of HIMSS Level 5. The HIMSS Analytics Electronic Medical Record Adoption Model (EMRAM) incorporates methodology and algorithms to automatically score hospitals around the world relative to their EPR capabilities.

For trusts to achieve Level 5, they must have full physician documentation using structured templates and intrusion/device protection, along with everything required up to and including Level 4.

When asked about this emphasis on HIMSS, Lisa Franklin, CIO at Hampshire and Isle of Wight Integrated Care System, said: “It’s right we should be looking at HIMSS Level 5 and clearly it would be desirable for there to be one single system across an entire ICS.”

Fellow CIO Amy Freeman, who is based at Mid Cheshire Hospitals NHS Foundation Trust, also looks upon the HIMSS framework favourably, emphasising that it is a good that we are “making sure that everybody has a minimum capability that is a standard we would all be willing to accept”.

“I’m quite pleased that it appears that they’re going to be using the HIMSS EMRAM model. In the NHS we quite often think we’re special and we need a special assessment of our own,” she added.

“The fact we’ve picked a benchmarking tool that’s been around for a long time and is well-proven across the globe gives more credence to the standard.”

But Leeds Teaching Hospitals’ Jones views were once again not as rosy as many of the other panel members, stressing that he personally “wouldn’t get hung up about HIMSS Level 5” and that “it shouldn’t be a project plan”.

“The way that the HIMSS judging is done, if you’re not doing one thing in HIMSS Level 0 but you’re doing everything else up to HIMSS Level 5, then you get graded as HIMSS Level 0,” he said.

“I really object to those sorts of frameworks being treated as project plans and as targets because I don’t think a framework developed in abstract should be driving the investments of individual hospitals.”

There is a stark contrast of opinion on the HIMMS EMRAM model, but the general view is that the framework can set a good standard for trusts around the country to aim for, despite it not being a perfect benchmark for some.

The question of whether the EPR targets set out by Sajid Javid are realistic and achievable or fanciful and over-ambitious has also succeeded in diving opinion within the CIO Advisory panel.

Franklin (from Mid Cheshire Hospitals) saw both sides of the argument, claiming that it is feasible to have EPRs across all settings in ICSs, but is an unrealistic target without proper support.

“If the question is about whether the aim of achieving EPRs across all settings in ICSs is achievable, of course it is, if we invest in the people who haven’t got EPRs,” she said.

“If the question is about whether the aim of getting one or two EPRs per ICS is realistic, no, not without significant funding which we know isn’t available.”

While Rotherham’s Rawlinson doubted that we will be able to achieve the EPR targets in the timeframe set out.

He said that it is “not necessarily realistic in any short period of time at all” and that “it will be a five, ten-year minimum type of ambition” rather than something that can be done in less than a couple of years.

The panel members were once again very split on whether these targets set out can be achieved and although many agree with the intention and the idea in principle of these ambitions, how they will be accomplished remains the key question.

A healthcare cultural shift on the horizon

There is a cultural shift on the horizon in the way the NHS and UK healthcare system operates and delivers healthcare. The CIO Advisory Panel members were all very enthusiastic and excited about the impact on healthcare that this change in policy direction and the EPR targets set out would have if everything went to plan.

On the potential impact, Walker said: “Don’t get me wrong, it would be staggering. To have a digitised ecosystem for our trusts is massive, but the cultural shift in healthcare delivery will also be huge.

“So, it isn’t just the procurement or mobilisation, it is the complete transformation of the way health and care is done within those organisational boundaries.”

Although the broad concepts of levelling up and convergence were generally looked upon in a positive light by members of the Digital Health Networks CIO Advisory Panel, the way in which the new policy direction will be implemented and achieved, particularly in the time frame set out, left some lacking confidence in the plans.

Part two of our series on levelling up and EPR convergence will be focused on the CCIO and CNIO Advisory Panels.